Swim your way down to Squidfire's 10th Art Mart

Well, I hope we literally don't have to swim to Fells Point tomorrow morning but the forecast does call for some early morning thunderstorms (that I would normally say are quite romantic if I weren't peddling my prints) and a wee bit o' wind. I'm not made of sugar, though, so why don't you join illegible ink and 50 other local and regional crafters at Squidfire's 10th Art Mart from 11am-6pm in Fells Point? 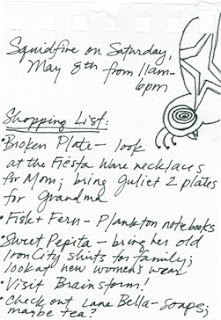 Hey Mom, do you want me to add anything else to my list for you on Mother's Day?
Posted by illegible ink at 11:09 AM No comments:

"It's just another Meatless Monday" Month

When I saw the headlines this morning that Mario Batali was going meatless, the foodie in me was immediately intrigued. I mean, this culinary giant was once photographed with sausages draped around his neck like a chic scarf and his father owns a world-renowned meat-curing shop in Seattle! Had he decided to put the veal chop down for good? Well, not exactly, but Mario Batali is the latest voice joining the Meatless Monday movement. 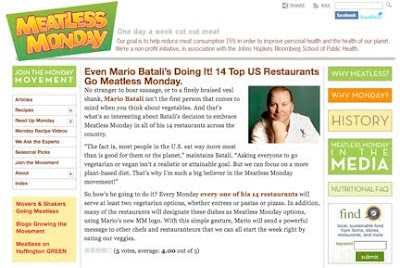 According to the Johns Hopkins Bloomberg School of Health (a Meatless Monday educational partner), going meatless may reduce your risk of chronic preventable conditions like cancer, cardiovascular disease, diabetes and obesity. It can also help reduce your carbon footprint and save precious resources like fresh water and fossil fuel. It seems like a pretty good compromise even for the strictest of carnivores.

So each Monday, every one of Batali's 14 restaurants will serve at least two vegetarian options (specially designated as "Meatless Monday options" to promote awareness). The like-minded chef said, "Asking everyone to go vegetarian or vegan isn't a realistic or attainable goal. But we can focus on a more plant-based diet, and support the farmers who raise their animals humanely and sustainably." (See the full article from Chris Elam here.)

After several hours of investigation on the internet and talking with a few folks at the office about some of their favorite vegetarian recipes, I started to think about the results from my Thirty Days of Grilled Cheese Challenge and decided I could easily do It's just another Meatless Monday Month. (And if I "meat" the month-long challenge, maybe I could even commit to the entire summer? Baby steps, baby steps - just as long as The Bangles aren't continuously stuck in my head.)

Mr. illegible ink is probably going to raise his eyebrow when he hears what I've signed him up for but I think I can convince him to try at least two vegetarian options each Monday this month. (It's not like I've asked him to jump into Thirty Meatless Days & Nights, right?)