William Frederick "Buffalo Bill" Cody is probably known by most Americans as a soldier, bison hunter and showman. The Wild West showman earned his nickname through his contract to supply Kansas Pacific Railroad workers with buffalo meat - he reportedly killed 4,860 American Bison in eight months during 1867-68! (Ironically, the nickname originally applied to Bill Comstock, but Comstock and Cody competed in a shooting match for the exclusive rights to the nickname and Cody won.)

With all this information, you're probably expecting a bison grilled cheese sandwich but instead I've thrown in a twist and used Buffalo wings. (I just couldn't bring myself to give a shout out to Buffalo right now during NHL Hockey playoffs.) Classic Buffalo-style chicken wings are made with a vinegar-based cayenne pepper hot sauce and butter, and are traditionally served with celery and blue cheese dressing. 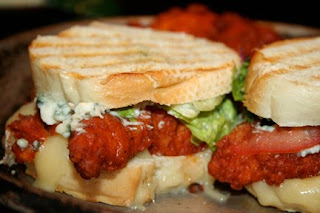